Bonjour à tous! like they say in Paris! I just returned from my first visit to this incredible and culturally rich city. And what an experience it was! After so many months of preparations, of watching videos on YouTube, of deciding what I wanted to see, where I wanted to go… I was finally there! And let me assure you the city is more beautiful than in the movies, and of course,  I tried to do it all; the boats on La Seine (I did 2), the Louvre museum to see La Gioconde, the Orsay (my favorite, I confess I love Van Gogh), the Tootbus that stops at all major attractions, the Eiffel Tower, the Arc of Triumph, the Tuileries and Luxembourg gardens, the tomb of Napoleon at Les Invalides and how his presence is felt all over Paris in the many monuments he commissioned while he was in power...  I was beyond happy! Et bien sûr, j'étais en France!, one of the best wine producers in the world, so basically, I was for about 10 days in a wine heaven, but also pastry/bread/cheese heaven, and so ready to taste all that Paris had to offer.

And of course, any dream vacation had to include one wine appellation. Where else if not Champagne!  Specifically Épernay, which is only an hour and 10 minutes away by train. Unfortunately I was there only for a day, but I promised myself to return to taste more of these fantastic wines. Upon my arrival at the Épernay train station, a truly charming town,  I walked a few blocks to the avenue of Champagne, where basically, most producers are located side by side.

My first tour of the day was to my favorite Champagne house: Pol Roger. I guess I have the same taste for fine things like Sir Winston Churchill who once said that “Pol Roger was the most drinkable address in the world”. Indeed, Pol Roger was his favorite too. He discovered Pol Roger Champagne in the UK in 1928 and rapidly became a fan, later in the 1940s he became close friends with the then owners Jacques and Odette Pol Roger.  Their friendship was such that the Pol Roger family decided to name their top cuvée in his honor: Sir Winston Churchill. It was released for the first time in 1984, 9 years after its vintage, which was in 1975 and it was sold in magnums to the UK market. To this date the winery still makes this wine, counting every year with the approval seal of Sir Winston Churchill’s heirs. Pol Roger is also a favorite of the house of England, and was the Champagne served in many weddings and special events, including the wedding of Prince William and Kate Middleton. 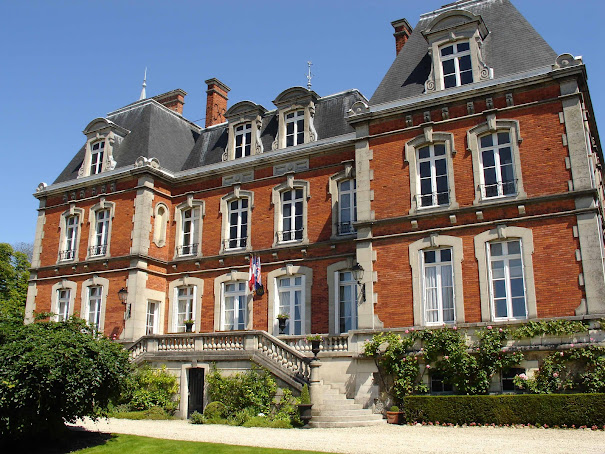 But before I continue talking about the winery, allow me to thank Sylviane Lemaire, who graciously agreed to receive me. See, Pol Roger is not open to visitors like many of the rest of wineries on the avenue, this treat made my tour and experience even more amazing!

Now, when you drink Pol Roger Champagne, you need to realize that you are drinking the tradition and the know-how of six generations. Family owned since its beginnings in 1849, the founder, Pol Roger, started selling his wines when he was only 18 years old and from there with every generation, the company continued to grow and overcame many crises, including the collapse of their cellars in the 1900s with the loss of about 1,500,000 champagne bottles, two World wars, the economic crisis of 1929 and even US prohibition. Through it all, the company not only managed to survive but also to succeed, expanding its markets and fame all over the world and at the same time investing continuously in their cellars and vineyards.

In order to make their fantastic line up, Pol Roger obtains fruit from a total of 200 hectares distributed in Grand Cru and Premier Cru areas in Champagne (mostly located in the Montagne de Reims and the Côte des Blancs sub-appellations). 92 of those hectares are owned by the winery that started planting grapes in 1954 and the rest of the fruit comes from long term contracts with local growers. Fermentations, both alcoholic and malolactic take place at the winery, in the limestone cellars I visited. Here and located 33 meters from street level, the aging takes place, at 9º centigrade Celsius (48º Fh) which provides a humid and cool environment for fine bubble making and autolysis that gives Champagne its wonderful aromas and flavors. Read more about the Champagne vinification process in my post published in 2020.

After aging that is always longer than what is stipulated by law, comes the labor intensive remuage (riddling) done mostly by hand. Pol Roger prides itself for giving its vintage Champagnes longer aging, which yields a fantastic lacy mousse de pris and layers of complexity. Aging goes for about 7 years for the Blanc de Blancs and Rosé and an average of 10 years for the Sir Winston Churchill cuvée.

My recommendations: I had the pleasure of tasting the current releases of their 4 top wines (all vintage dated, meaning these are not made every year, and are made only when the vintage is excellent).  I tasted 3 of these wines at the winery and 1 at the hotel (it was a gift from Sylviane that I drank for my birthday 4 days later).

Pol Roger Vintage 2015 is a sophisticated blend of 60% Pinot Noir with 40% Chardonnay.  This Champagne exudes ripe apricot, honey, toasted nuts and brioche notes. Full bodied and very elegant, yet structured with a long and lively finish. $110

Pol Roger Rosé 2015, was always one of my favorites, the first vintage I tasted and loved was the 1992. This Rosé is made of 60% Pinot Noir with 40% Chardonnay sourced from the best Crus in Montagne de Reims. It features refreshing raspberry, strawberry and fresh ginger notes, full bodied and with a smoky, mineral finish. $125

And finally, I saved the best for last, Pol Roger Sir Winston Churchill 2013, the winery keeps the blend a secret, though Sylviane admitted it’s mostly Pinot Noir with a smaller percentage of Chardonnay. A powerful and magnificent Champagne, featuring baked apple tart, preserved lemon, and biscuit, yeasty notes. Rich and generous, yet so unbelievably refined! What an incredible way to end my tour. $250. 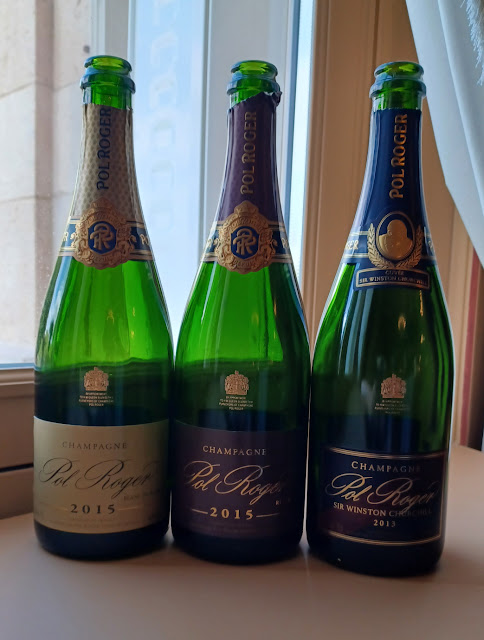 There will be a second article about my visit to Epernay, coming in December, featuring the wines of another Champagne house (Boizel). In the meantime, remember to #drinkupamerica.