On August 1-7, we celebrate Albariño week! Albariño is one of the most popular white grapes from Spain, though it is not the most planted, that honor belongs to Airén, which is by the way, the most planted variety in the world.
Albariño is a wonderful summer white, and a great value too! with prices
usually starting at $13 and up.
Most Albariño is produced in the Rías Baixas appellation, marked with a black circle, on the map below, located in NW Spain, facing the Atlantic ocean.

Map courtesy of Wines from Spain/ICEX. 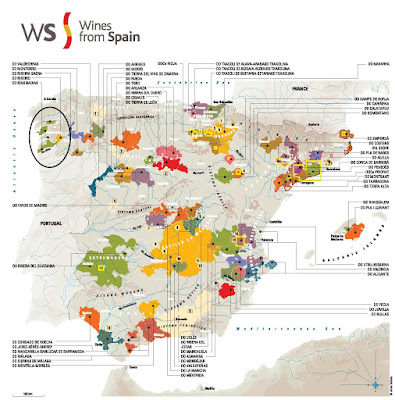 Now, if you see Albariño on the label of your wine, by law this wine must be 100% made from this grape. As you can imagine, there are other white grapes planted in Rías Baixas too! such as Torrontés, Treixadura, Caiño, Godello, these are also allowed in the Rías Baixas blend sold as blanco (white), but only in tiny percentages. If any of these grape names are familiar to you, is probably because some of them are grown in Portugal where they are part of the Vinho Verde blend.
There are different theories about the origin of Albariño, most say, it is original from Spain from the subzone of Val do Salnés, closest to the Atlantic, others that came from Germany with the Cistercian Monks or that Albariño is from northern Portugal, know there as Alvarinho.

All pictures, courtesy of DO Rías Baixas 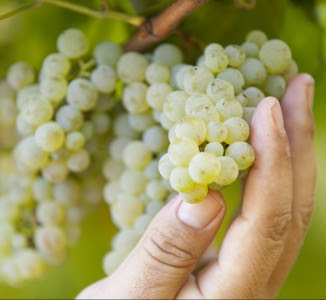 From a viticultural point of view, Albariño is a very low yielding variety, it grows mostly on sandy, coarse soils, called xabres; some of which contain a bit of limestone, granite and clay. The Rías Baixas appellation is also known as “Green Spain”, this is due to the abundant rain that the area receives every year (about 1600 mm). It is indeed really humid here, and very much influenced by the Atlantic ocean (with a maritime climate similar to Bordeaux).

All pictures, courtesy of DO Rías Baixas 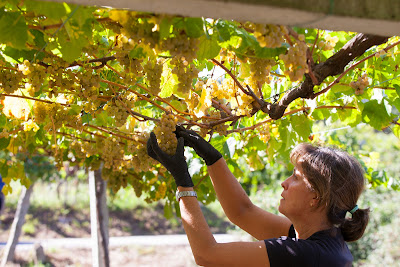 To prevent fungal diseases most of the vines are trained in Pergolas/ Parrales (high wires) so that air can easily circulate and are planted facing SW to aid ripening.
Albariño yields a very aromatic wine, usually featuring white peach, apricots, pineapple, citrus (grapefruit, lime) and mineral notes. It will showcase solid acidity, a medium body and balanced alcohol, usually at 12,5 %. It is vinified in stainless steel to preserve the Albariño refreshing character. These whites are not usually aged in oak, but aging on lees is very common, which will add more body and complexity to the wines. Albariños are made to be drunk young, no more than 3 years from vintage.
Best food matches for Albariño are all types of seafood, including octopus (pulpo gallego, a typical dish in Galicia), but also shellfish: shrimp, oysters, mussels,scallops, lobster. And all types of light white fish fillets such as cod, hake, filet of sole, flounder, etc.

The D.O. Rías Baixas has different subzones, yielding different wine profiles; for example, in the Val do Salnés Valley, where most of the wineries are based, is cooler, so the wines tend to be more green, crispier and mineral (with citrus: grapefruit, lime and green apple notes). While in Condado do Tea, located inland and south, where is warmer, wines are bigger and yield tropical notes (nectarine, pineapple and mango). In O Rosal, wines tend to be a happy medium of these two, featuring white peach and apricot notes.
Depending on the subzone some wines will be 100 % Albariño like in Val do Salnés  and Soutomaior, while in Condado do Tea and O Rosal, is easier to find also blanco (white) blends of 70% Albariño with the other allowed white varieties.

Recommended Producers:
Though, there are plantings of Albariño in Australia, California and Oregon. No samples have impressed me so far, so my advice is to stick to Spanish producers from Rías Baixas. Here are some of my all time favorites:
Fillaboa, Palacio de Fefinañes, Santiago Ruiz, Terras Gauda, Viña Nora, Pazo de Barrantes, Granbazán, Mar de Frades,Fillaboa, Pazo de Señorans, Condes de Albarei, Martin Codáx, Paco & Lola, Marqués de Cáceres.

Below, some Albariños that I tasted lately and liked, I indicated the subzones where these come from, so that you are aware of the different styles.

Viña Nora Albariño 2018 $17.99 (Condado do Tea)
This wine underwent maceration pelliculaire to extract more aromas and flavors for 6 hours, followed by fermentation in stainless steel and aging on lees for 4 months. This elegant Albariño features white peach and honeysuckle notes and a kiss of minerality. 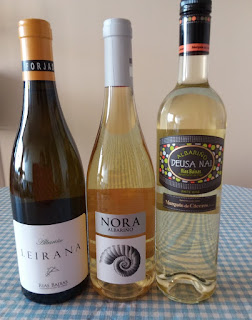 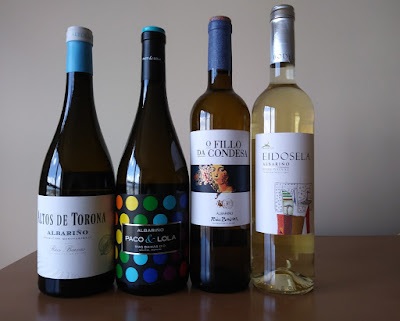