It’s time we learn about Nebbiolo, the most important red variety in Italy, even though it is not the most planted one, that honor belongs to another red grape: Sangiovese.
Because we are dealing with the Old World, with a few exceptions (like in the case of Nebbiolo d’ Alba) you won’t see the name of this grape on the label, you will probably see the appellation. Besides this, Nebbiolo changes names quite often, it’s known as Spanna in DOCG Gattinara or as Chiavennasca in DOCG Valtellina Superiore.  But its two most known locations in the world are the very famous DOCGs: Barolo and Barbaresco, where some of the best expressions of Nebbiolo are produced.

Nebbiolo comes originally from the Piedmont region. Piedmont means foot of the mountains, and indeed the most important vineyards are all located at the foothills of two important chains, the Alps and the Apennines. Nebbiolo’s name comes from the word “nebbia” which means fog in Italian, referring to the fog that is common in the hills of Langhe, during the months of September and October. It’s this fog or nebbia that will help early budding but late ripening Nebbiolo to obtain perfect maturity.

Though Barolo and Barbaresco are only 10 miles apart, and therefore share similar climates and soils, there are some differences. Barbaresco is usually lighter, more elegant, less austere than Barolo and it can also be drunk sooner. Barolo usually needs aging to soften its strong tannins, at least a minimum of 10 years from vintage before the wine is drinkable. Nebbiolo requires dry weather conditions, it is perfectly suited for the continental climate of the Piedmont, characterized by hot summers and cold winters. The best soils for Nebbiolo are clay and limestone (like in Albanese) or sandy (like in Roero), in the Valtellina DOCG, soils are mostly schisty and granitic. Best locations to grow Nebbiolo will be usually facing SW and at altitudes between 150-300 m, go higher up and Nebbiolo will have issues to ripen.

Stylistically, Nebbiolo produces wines that are in the Powerbomb category, meaning a wine that is highly tannic with high acidity,  tons of fruit, with a full body and alcohol levels between 13 and 14,5%. Surprisingly Nebbiolo’s color is light for a red of its statue, showing pale garnet and brickish tones.But don’t let their color fool you! Nebbiolo has plenty of personality.

There are two different styles of Barolo: Traditional or Modernist.  Traditional Barolo will feature Nebbiolo macerations for a long time to extract color and tannins (about 30-50 days) and then agings for a long time in neutral Slovakian oak, yielding a very austere and tannic wine that requires long wine cellar aging. Modernist Barolo is produced differently, with shorter Nebbiolo macerations (7-10 days), and aging in new French barriques, this will yield a wine that is fruitier, softer and that requires less time to be drunk. There are also differences by location, Barolo as in Burgundy has many crus, these will be  the source of some of the most expensive/best wines. Yet in general, Barolos of  the town from Serralunga are the most tannic and austere, while Barolos from the town of La Morra tend to be more approachable (the other extreme), in between there are other towns that produce both styles.
By law, Barolos are usually age for 3 years (18 months minimum in barrel), while riservas are aged for a minimum of 5 years. Barbarescos are aged for less time, 2 years with at least 9 months in barrel and Riservas 4 years.
Nebbiolo is usually not blended, both Barolo and Barbaresco must be 100% Nebbiolo wines, but in Gattinara and Ghemme a tiny amount of  Bonarda, Croatina or Vespolina grapes are allowed to the blend.

Nebbiolo’s flavor profile will feature aromas of tar, roses, blackberry, black chocolate,  prunes, cherries, leather and dry spices. With ageing, Nebbiolo will show game, truffles and mushrooms notes.
Though Barolo and Barbaresco are the best known appellations, there are other Nebbiolos produced in appellations, such as: Gattinara, Nebbiolo D’Alba and Valtellina Superiore. All of these are still big red wines,yet  less tannic and sooner drinkable than Barolo and Barbaresco. These wines are usually cheaper since Barolo and Barbaresco usually will cost you at least $40 a bottle to start.
Top Barolo wines can age for a very long time, at least for  20-30 + years. Barbarescos gets their peek sooner at 10-15 years. Lighter versions of Nebbiolo, such as Nebbiolo d’ Alba, Gattinara, Ghemme can be drunk earlier between 5-8 years from vintage. As with everything in life, patience is key here, so don’t open that bottle before its time!

Recommended Nebbiolo Producers: note that some producers make both  Barolo and Barbaresco, so I added the brands in both groups.

Wines I have tasted lately that I recommend you to try. (I had the pleasure of attending several Italian events this year so I divided the wines in two groups (value Nebbiolo) and (expensive but so worthwhile Nebbiolo). 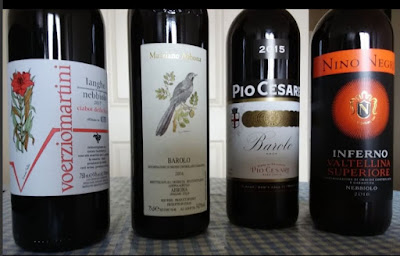 Thank you to all the importers and wineries that provided samples for me to taste.

Once again a mini class that I will try to make as fun as possible. We have already studied the grapes and wines from France and now is the turn to do the same with Italy!
Let me start by saying that after Spain, Italy has more vineyards planted that any other country in the world, indeed the whole country is a vineyard. Italians are well known for their love for wines and foods and have also been blessed with many good conditions for vine growing. Most of the best vineyards are at the foot of the mountains (Apennines or Dolomites) plus is also influenced by the sea on both sides, it has more than 1,000 native varieties, hopefully there’s no need for you to learn them all! But I will help you identify the styles of some of the most famous Italian wines.
You should also know, that though there are very expensive wines in Italy,  there’s also plenty of value. Italian wines are classified like in France. On the top for quality we find the DOC and DOCG appellations (Denominazione di Origine Controllata and Denominazione di Origine Controllata e Garantita), these guarantee quality and origin. Then we have IGT, Indicazione Geografica Tipica (which I see as a DOC and DOCG soon to be) and lastly the Vino da Tavola, which are  the simplest wines of them all.
When buying Italian wines, always aim for DOC or DOCG. Of course there are exceptions like the “Super Tuscans”, these were sold as Vino da Tavola but very fancy VT. The reason was the winemakers decided to use grapes not allowed in the appellations, when this happened, the law was so super tough that they couldn’t sell the wine as DOC or DOCG. Luckily, the law changed and some appellations were allowed to use or include international varieties in their blend (these are usually mostly French: i.e. Cabernet Sauvignon).
Below you will find the most important appellations and grape varieties in Italy, I included a column on the right to indicate the style of wine, so you have more and less and idea what you are getting when you buy these.
Notice, that in some cases the grapes are listed on the label, for example Barbera d’ Alba or Dolcetto d’ Alba (both Barbera and Dolcetto are the grapes) and Alba is the appellation.

Hoping all our Italian friends have a speedy recovery soon! Silvina. 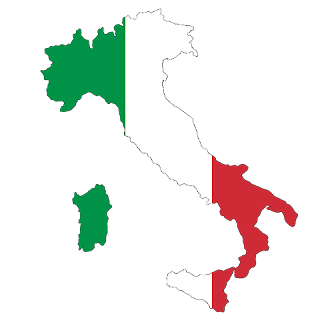 This April 17 we will celebrate Malbec World Day, so I said to myself, the time has come to teach about one of the grapes that grows in my country- Argentina-promising you my dear winos to dedicate a post in the future to the other half of the Argentinean duo: Torrontés.

What is not to love about Malbec? It has all the elements to be a crowd’s pleaser since it produces full bodied reds with velvety tannins, luscious fruit and plenty of spice. To that we can add the fact that it also offers great value with good wines starting at $15 and up.

There are two defined styles of Malbec, the Argentinean type (New World) will have plenty of black fruit notes, low to medium acidity, soft tannins and high alcohol and the wines of Cahors (Old World) which are usually more tannic with lower alcohol, higher acidity and featuring more herbal notes.

Originally Malbec, also known as Cot, is from Cahors in SW France, where it produces some of the darkest, purple colored reds. I think it is a tie between Malbec and Syrah regarding which one has the darkest color… which by the way will help you identify this variety very easily, when tasting blind. So deep and dark is its juice, Malbec was known as the “Black wine of Cahors”, and in the past they were used to beef up and improve wines from other appellations too. Outside from SW France, Malbec plays a mini role as one of the five grape varieties allowed in the Bordeaux blend but these days is replaced by beefer Merlot.

Malbec thrives in warm weather and requires more heat than Cabernet Sauvignon and Merlot to ripen properly. It ripens at mid season and can suffer from frost and coulure. Argentinian Malbec is planted at some of the highest vineyards in the world, most of them are located at the foothills of the Andes, at heights between 2,800 to 5,000 feet. Altitude plays a very important role here to keep acidity levels in check. In Cahors, most vineyards are planted on gravel soils, the climate here is very much influenced by both the Atlantic and the Mediterranean seas but still with hot summers and rainy winters.

Because of its structure, Malbec best samples can age up to 20 years, inexpensive samples should be consumed within 5 years of their release, the rest can age up to 10 years. In Argentina most wines are 100% Malbec but there are also successful blends with Cabernet Sauvignon and Bonarda. In Cahors, by law 70 % of the blend must be made from Malbec, which is usually complemented with 30% of Tannat and Merlot. 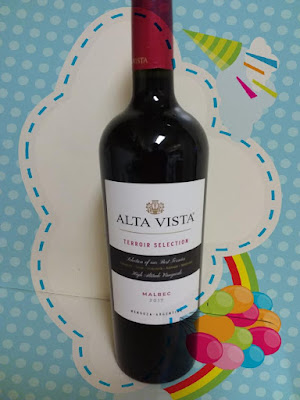 A special thanks to Kobrand,Colangelo PR and HB Merchants for providing samples for me to taste. 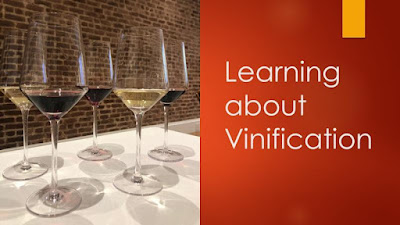 So there you have it! Cheers! Silvina
#Vinification101 #thoughtsoflawina #WineWednesday #Wine #Vinification.
Remember to subscribe to keep receiving Thoughts of La Wina in your inbox.  For more wine recommendations, you can follow me on Instagram: @Silvinalawina.
at April 07, 2020