Historically France, Italy and Spain have claimed for themselves to be the country of origin for Garnacha Tinta/ Grenache Noir/ Cannonau. However, all historical evidence proves it is indeed a Spanish grape variety originally from Aragón. This is so, because in Spain is where we can find the greatest diversity of this vine, including all three colors of the Garnacha varieties (black, grey and white) as well as Garnacha mutations such as the Garnacha Peluda.

Garnacha/Grenache is a very Mediterranean grape, it was exported from Spain to the South of France (Languedoc Roussillon, and the Southern Rhône), to Sardinia, Italy but, it also can be found in other countries along the Mediterranean such as Greece, Israel, Cyprus and North Africa. This is due in part to its love for warm, hot weather, Garnacha/Grenache needs plenty of sunshine to mature and won’t do well in moderate climates.

It is early budding but late ripening, it has plenty of sugar, which means it can yield high alcohol levels very easily on its own, (16% is the norm). It’s a very vigorous vine, usually pruned in a short bush (globelet), closer to the ground, to easily receive the heat from the soils and withstand strong winds like the fierce Mistral in the Southern Rhône.  It’s a vigorous vine, and does better at low yields, no more than 35 hl/ht, though top producers such as the famous Chateau Rayas will only have yields of 15 hl/ht tops and others in Priorat will have vines with yields at 5 hl/ht.  It can suffer from coulure (uneven flowering) and from downy mildew and bunch rot due to its tight bunches and thin skins. It does best when stressed, and can tolerate drought, better than any other variety, though in some places irrigation is allowed. Hot, well drained soils are best for Garnacha/Grenache, such as the galets (huge round stones) of Châteauneuf-du-Pape, or the llicorella (slate) or schist of Priorat, but also soils with high limestone content will be excellent to provide acidity that this variety very much needs.

It yields a very sexy wine with a pale red color (a usual give away when tasting blind) and red fruit notes of strawberry, red plum, red cherries, fresh or stewed. It can showcase spices such as garrigue herbs,oregano, tobacco and white pepper. Most Garnacha/Grenache based wines will have low to moderate acidity, and very soft tannins. When yields are high such as in the basic appellations of Côtes du Rhône, the wines tend to be approachable sooner. Low yields give wines with a lot of concentration and extract, heavy and dense, these can easily age for at least 20 years. Low yields usually happen from meticulous pruning but also from very old vines, some of which can be over 100 years old and ungrafted. (like those in Priorat & Barossa Valley).
The alcohol level in these wines is always high, and it can be a challenge for the producer to keep it balanced with the rest of the elements, most Garnacha/Grenache wines tend to have big bodies, even in the case of rosé. Garnacha/Grenache is prone to oxidation, and this is why it is usually blended with other grapes in most appellations; historically, it has been used as a filler that provides body and alcohol. GSM wines are the typical blend of Mourvèdre (Monastrell) Garnacha/Grenache and Syrah popular in France, California and Australia.

At the winery and to make red wines, Garnacha is macerated with skins to extract color and some carbonic maceration (whole berry fermentation), which is used to preserve its fruit. Stainless steel, concrete or old oak vessels are preferred, and no excessive new oak, which can strip the wine of its delicious fruitiness. A slow and long fermentation, with minimal racking is recommended to avoid oxidation.

In the case of rosés, the focus is to keep the fruit and the freshness as much as possible, to do that, producers will pick earlier to keep some of the acidity, and do direct pressing, very quickly getting a pale salmon color wine like the wines of Provence. In Navarra, Spain, there is a short maceration with skins which will provide a deeper pink color. Stainless steel fermentation at low temperatures is the norm.

In the case of the VDN (Vin Doux Naturels), these are fortified sweet wines, meaning that alcohol has been added to them, raising their levels to 16-18%. The addition of neutral grape spirit is done like in Port, during fermentation and to halt it. The addition of the spirit will kill the yeasts before they have a chance to eat all the sugars in the must, which will result in a sweet fortified wine. Some of the VDN are made in a youthful style, that will feature black fruit notes of blackberries, cherries, raisins. Others are exposed to oxygen, like Oloroso sherries or Madeiras, many of them are aged in demijohns (glass, large containers) that are exposed to the sun and heat. These wines will acquire a rancio character and feature caramel, nuts, coffee and chocolate notes.

Best places to grow Grenache are in the Southern Rhône,  like Côtes du Rhône, Côtes du Rhône Villages that provide entry level, every night, uncomplicated reds. Things will get more interesting in classic appellations such as Ventoux, Vacqueyras, Gigondas, Rasteau and Châteauneuf-du-Pape. Tavel is known for its wonderful and refreshing rosés, blended with Cinsault. Reds are usually blends of Grenache with Syrah and Mourvèdre. There’s plenty of Grenache in appellations in the Languedoc Roussillon and Provence (rosés). In Spain, we find the beefest Garnacha reds in Priorat, where it can be blended with Syrah, Merlot and Cabernet Sauvignon. Navarra makes wonderful rosé wines (sometimes blended with Tempranillo) Campo de Borja, Calatayud, Cariñena and Penedès produce beautiful reds made of Garnacha, sometimes blended with Carignan.  Australia’s Barossa Valley and Mc Laren Vale produce good samples from very old vines usually between 100 to 150 years old.  California’s Paso Robles and South Africa have shown a lot of promise too.
In general, Garnacha/Grenache is best consumed when young, except in the case of big bodied reds that can age up to 20 years, VDN can age for much longer for 30 to 40 years.

New releases I tasted lately, all under $25: Garnacha/ Grenache at this price point, offers everything to please the crowds: fat bodied reds, high but very well integrated alcohol, super soft tannins and plenty of fruit, minerality and spice! Try any of them, you won't be disappointed!

Las Moradas de San Martin Senda 2016, $13.99 (DO Vinos de Madrid)
Made from 100% Garnacha from 40 to 85 years old vines. This wine is organic, and bottled without filtration. Aged for 10 months in French oak.
Fleshy red with light tannins offers black fruits (plum and blackberries) blended with spice (cinnamon and cloves) notes from oak.

Marqués de Cáceres Garnacha 2018, $18.99 (DO Cariñena)
100% Garnacha red from vines averaging 30 to 40 years old. Macerated with skins for 15 days followed by alcoholic and malolactic fermentation in stainless steel and aged in bottle for 6 months.
Smooth, yet dense red, full of red fruit aromas featuring fresh raspberry and strawberry, and a beautiful juicy finish.

Famille Perrin Les Cornuds 2017, $19.99 (AOC Vinsobres)
The typical blend of Grenache and Syrah. The Grenache is fermented in stainless steel while the Syrah is fermented in wooded tanks, the Syrah is also partially aged in oak from one year.
Tantalizing red, featuring blackberry, cherry and black pepper notes.

Castell D' Age 0%S02 Added, 100% Garnatxa 2018, $23.99 (DO Penedès)
100 % Garnacha from biodynamic vineyards. The wine was made without sulfur and it says so on the label. Fermentation takes place with indigenous yeasts. No filtration or clarification, this is a red "au naturel".
Super sensuous red, featuring raspberry marmalade and black cherry notes. 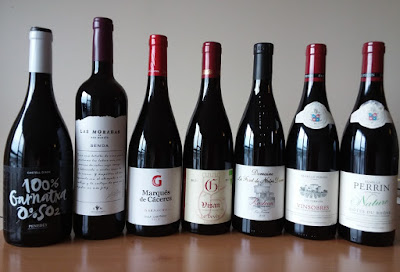