Happy Sherry Week 2020!
Back in November 2019, I dedicated a post to dry sherries covering both Manzanilla and Fino styles. Those that wish to refresh their knowledge, can read it again here.
Now, the time has come to explore the rest of the categories of Sherry, specifically those that age without flor, also known as "oxidized sherries" which can be dry, medium dry or sweet.
Remember that all Sherry starts its life as a dry wine, to which brandy/ spirit is added to create the different styles. According to European regulations, authentic Sherry can only be made in the D.O. Jerez-Xérès-Sherry in Andalusia, Spain, with the aging of the wines happening in one of these three main cities: Sanlúcar de Barrameda, Jerez de la Frontera and Puerto de Santa María, where most almacenistas or producers are based. 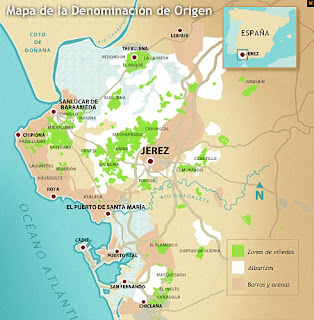 The most important grape variety in Sherry is the Palomino Fino grape, which counts for about 90% of all the vineyards, but they also have Moscatel (Muscat of Alexandria) and Pedro Ximénez, PX for short. The last two make wonderful wines on their own, but they are mostly used to sweeten and to add color to the different styles.
Once the producers have the base wine, it is time to decide which style of Sherry they want to make and to add the amount of spirit accordingly. They will add less for Manzanilla and Fino so that the Flor can grow, and more for the other styles described below. Aging will always happen in the Solera System (or fractional blending) where the new wines are placed on the top of the tier or criadera and the oldest in the bottom, closer to the floor (suelo in Spanish). Every year when it’s time to bottle, producers will draw up to 30% of the liquid from the bottom and replenish the rest with wines from the top. Running the scales, see image below that explains things more clearly. 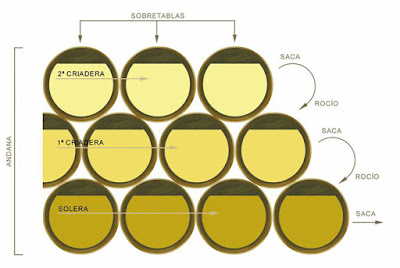 Because of this fractional blending, Sherry doesn’t  usually have a vintage, and it is indeed a blend of different vintages. Remember, there are two types of aging for Sherry, under flor (yeast) or biological, where the wines are protected from oxygen (like in Manzanilla and Fino) or without flor, where the wines are exposed to oxygen. In order to do the last styles, producers add a bit more of brandy/ spirit, killing the flor that cannot survive when alcohol levels go higher than 16º.  Oxidized Sherries normally have alcohol levels that can go from 17-22º. Exposition to oxygen will not only change the color of Sherry from clear to different shades of orange, brick, amber, mahogany, dark brown, etc (see picture below), but the wine will acquire delicious rancio notes, which includes, orange peel, golden raisins, dried fruits, spices, toasted nuts: walnut, hazelnut, caramel, toffee, tobacco, prunes, dates, etc. 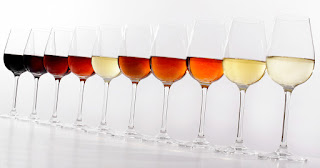 From right to left, check out the different styles of Sherry: Manzanilla is the palest and then Fino, Amontillado, Palo Cortado, Cream (Oloroso with PX) Pale Cream (sweet Fino), Oloroso. At the very end and almost black, the PX (which is sweetest).
Amontillado
Amontillado is considered the third style after Manzanilla and Fino. Enjoying both styles of aging, first the wines age for a while under flor (biologically), and then, producers add more spirit, killing the flor, with the wines continuing their aging, now exposed to oxygen like in Oloroso. This is why they are often described as Aged Finos.
Amontillados are made from Palomino Fino grapes and can be dry or sweet and they are full bodied and complex wines with a beautiful amber color and notes of preserved orange peel, almonds, walnuts and dried fruits. Some of the finest Soleras will feature 10 or more vintages in their blend, see some fine samples recommended at the end.

Palo Cortado
Palo Cortado, is a happy medium between Amontillado and Oloroso Sherries.  This wine usually has the nose and elegance of an Amontillado but the body texture of an Oloroso. Palo Cortado's alcohol levels range between 18-22º, making these sherries fuller than Amontillados. Palo Cortados start their life as a Fino but somewhere a long the way, they show different notes than set them apart, they are then fortified to 17º and continue their oxidative aging in barrel. Some of the typical aromas of Palo Cortado are bitter orange, dried leaves, toasted walnuts and exotic spices.

Oloroso
In the case of Oloroso Sherries, the wine is never exposed to flor, being fortified to alcohol levels between 18-20º from the beginning. The wine continues its aging in barrels where the aging by oxidation takes place in the solera system. In the barrels, Oloroso will acquire its characteristic brownish/ mahogany color and aromas of toffee, dates, caramel, chocolate, hazelnut, walnut, among others. Stylistically, Olorosos are dry, they have fuller bodies than previous styles and an opulent texture, while Cream Sherries are sweet Olorosos.

Up until here, all the styles above were made totally or mostly from Palomino Fino grapes with smaller addition of Moscatel or PX.
The last two are made 100% from the other two grape varieties allowed in the D.O. (appellation)

PX(Pedro Ximénez)
Dense and opulent, the final style and sweetest of Sherries is made solely from Pedro Ximénez grapes that have been dried in the sun on mats, concentrating the sugars. Indeed, they are basically a wine made from raisins, which you will smell immediately when tasting. The result is a sweet wine that has a very syrupy, viscous appearance. They are very dark and almost black in color. They feature notes of prunes, figs, licorice, dark chocolate and toasted coffee. Spaniards have these on their own or as dessert, on top of vanilla ice cream.

VOS and VORS: these two are special categories of sherry and the finest in the market.  They can be Amontillado, Oloroso, Palo Cortado and Pedro Ximénez styles but in this case, the solera includes very old wines. VOS means, Very Old Sherry, in this case, the youngest wine in the solera, by law, must be at least 20 years old. In the case of VORS or Very Old Rare Sherry, the youngest wine must be at least 30 years old. These are bit more pricey but super special, considering that prolonged aging in barrels will add complexity and finesse to the wines.