Today we continue learning about red grapes and this time I chose two of the most popular red varieties: Cabernet Sauvignon and Merlot.
These two raised to fame because they are key components of Bordeaux wines, that had been replicated all over the world. Cabernet Sauvignon is king on the left bank of the river Gironde and Merlot on the right bank. In Bordeaux, they are blended with other grapes (Malbec, Petit Verdot, Cabernet Franc). In the New World we will find some blends, but most often they are made as varietals, in California is easy to find 100% Cabernets, the same thing happens in Australia and Chile. 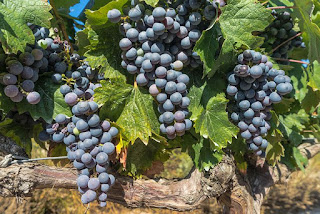 Cabernet Sauvignon
Cabernet is the offspring of two grape varieties: Cabernet Franc and Sauvignon Blanc. It produces full bodied wines with structure (from tannins) and ageability. It requires warmth to mature and well drained soils. Too much sun will produce overripe wines, and not enough sun, green wines with vegetable notes (green pepper). Maritime climates such as the one in Bordeaux are ideal, but it will be happy anywhere that is warm. It is late ripening and budding and produces its best samples from low yields. Inexpensive versions are usually made from high yields and can be quite austere. It has thick skins and a high ratio of solids to juice,  which will provide color, tannins and concentration. It can withstand high temperature fermentations and long macerations. However, wines to be consumed young will undergo shorter macerations. Cabernet from Europe is usually less fruit forward than New World samples.

Cabernet’s flavor profile is dominated by black fruits: cassis, black currants, black cherries. After aging in the bottle best samples will show cigar box, tobacco, pencil shavings, mint, eucalyptus notes. It loves oak especially French but also does well when aged in a mix of French and American oak.
It will produce medium bodied wines at the inexpensive level and big power bombs and the premium label.  Cabernet is so loved by consumers that most producers don’t hesitate to add it to any blend, and since it has so much personality it will always dominate the blend.
Important locations to remember: Bordeaux appellations where some of the finest wines are made: Pauillac, Margaux, Pessac Leognan. In the US: Napa Valley, Alexander and Sonoma Valleys, Maipo Valley and Aconcagua Valley in Chile, Coonawarra and Margaret River in Australia,Tuscany in Italy (where some of Super Tuscans are made from 100% Cabernet Sauvignon) and in the Penedès, Spain.

For many it was always the other Bordeaux grape, though it is first in numbers (Merlot is the most planted red grape in Bordeaux). It was used to soften the structure and angularity of Cabernet Sauvignon and to add body. However, don’t let Merlot fool you, in the right conditions such as in Pomerol and Saint Emilion, it will produce powerbomb wines that are full and ripe with a velvety texture and of course many entry level reds. Merlot is a favorite, for those that prefer less acidity and tannins and more plushness in red wine.

Merlot likes cooler climates than Cabernet Sauvignon and ripens two to three weeks earlier. It does well in warm climates too, but it can overripe very quickly, and lose acidity, that is why some prefer to harvest earlier than later to make elegant wines.
Originally from Bordeaux, Merlot is the child of Cabernet Franc and Magdeleine Noire des Charentes, in Chile is often confused with Carménère and in California with Cabernet Franc, another Bordeaux grape, that is usually added to Merlot to provide acidity and perfume.
Two places are good for Merlot: St Emilion and Pomerol where it thrives in cool clay soils, (Pomerol) or in  sand & limestone ones (St Emilion). Clay gives wines with more substance, limestone, wines with more elegance. Best wines will come from lower yields 26-60hl/ha (Bordeaux), but higher yields can be found in the New World: New Zealand, Argentina, California. Merlot is extremely vigorous and requires cropping and canopy management. It also suffers from rot, especially in humid climates.

Most Merlot is made to be drunk young, but the serious wines can be as concentrated and extracted as Cabs and can age up to 25 years.
Merlot’s flavor profile will show black fruits such as plums, black cherry, prunes, figs, fruitcake. Also spices like cinnamon, cloves, truffles, tobacco, licorice, toasted nuts, chocolate.  In cooler climates: mint and some vegetable notes.
Outside of Bordeaux, good Merlot is produced in Italy (Tuscany, Umbria, Friuli,  the Maremma),the Languedoc, Washington, Long Island, California (Sonoma, Alexander Valley, Dry Creek,etc), Chile (Maipo, Aconcagua, Colchagua) etc.
Expect more fruit  and high alcohol in samples made in the New World.

Recommended Cabernet Sauvignon Producers: some of these can be quite pricey! yet I included them so you know the best expressions of each grape.

These are some Cabernet Sauvignon under $50, that I tasted recently: 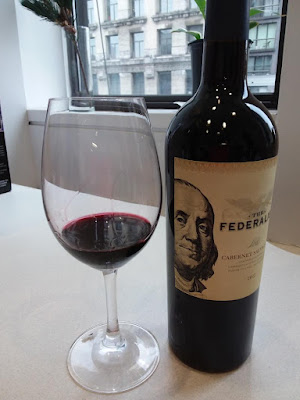