Today we are going to visit a very familiar and dear country to me: Spain. Those that know me, know that I worked for many years at the Spanish Embassy and 5 of which, I spent at Wines from Spain.

Spain is truly like a second home to me, it's true that in my home country: Argentina, I was exposed to Malbec by my father from an early age, but Spain was the country where I really had the opportunity to learn about wine and from there, off went La Wina to expand her horizons and to continue learning about the competition, basically the rest of the wine producing countries in the world.

So, what is so special about Spain? The first thing that comes to mind, is that Spain has more hectares dedicated to vine growing than any other country in the world, to be exact 967,000 and this translates into a huge variety of wines. Spain is a source of great quality wines, at every price, with an impressive selection at the value level. Spain is also extremely diverse, it produces all styles of wines: reds, whites, sparkling or Cava , fortified or Sherry you name it! click on the links on the words highlighted in blue on this post, so you can re-read older posts that I wrote about different Spanish regions and grapes.

Spain has in my opinion, a few problems though, for example brand names that are very difficult to pronounce by English speakers, yet their true challenge for those that are not familiar with Spain, is that most of their wines are made from native varieties, and that requires, all of you, to study, research and learn the different styles and familiarize yourself, not only with new regions but also new grapes. But hey! You did it with Italy, you did it with Portugal, why not Spain? I promise you won’t be disappointed!

Following European law, Spain has a similar set of regulations regarding viticulture, vinification and geographical origin like those found in other European countries, such as France, Italy or Portugal. This means, it will be kind of difficult to find the name of the grape on the label (with a few exceptions), instead producers list the name of the appellations/regions. In an effort to make things easier for you, I created a chart (see below) that matches grapes with regions and wine styles, hoping it will provide a bit of clarity.

Regarding quality, the top tier and best wines are the D.O.C., that means Denominación de Origen Calificada, this is similar to the Italian DOCG, followed by the D.O. wines, or in other words the Denominación de Origen, which is similar to the French AOC. Then we have the V.T. or Vinos de Tierra, which equals to the French Vin de Pays and lastly the Vinos de Mesa or table wines (which are at the very bottom of quality and not really imported to the US). Above all these categories, we have the Pagos Calificados appellations, Pagos Calificados mean single vineyards in Spanish, or Grand Cru in French, these are just a handful of appellations granted to what is considered the very best vineyards in Spain.

There are about 70 D.Os in Spain. Below, I will give you a brief intro to the most important appellations and grapes. Don't be afraid to give them a try! as I say to my students we should always make an effort to drink other things besides Napa or Bordeaux.

The most important Spanish red variety is Tempranillo (also known as Tinta de País, Tinta del Toro, Cencibel, Ul de Llebre and Tinta Roriz as it is known in Portugal) followed by Garnacha. Other important red native varieties are Monastrell (known elsewhere as Mourvèdre), Bobal and Mencía. There are also many plantings of international varieties and some producers make very good wines from those too, such as Cabernet Sauvignon, Syrah and Pinot Noir. For the whites, my two favorites are Verdejo and Albariño, but we can find also Viura, Godello, Moscatel and Airén, which by the way is the most planted variety in Spain. It's normally used to make brandy and light neutral table whites.  Spain makes great whites from Chardonnay, Sauvignon Blanc, Riesling and other French varieties. Most of the French varieties are planted in appellations such as the Penedès, Somontano and Navarra.

Except for the area of Galicia and el País Vasco (Basque Country) in the north,  where it is cool and wet; most of Spain enjoys plenty of sun and warm temperatures, so ripeness and alcohol levels are not difficult to obtain. However, the contrast, the style differences happen due to factors such as the proximity to the sea (Atlantic or Mediterranean) the proximity to rivers such as the Ebro, Guadalquivir and the Duero, but most of all, to the altitude of the vineyards. Spain is, after all, a big "meseta" or elevated plateau, with vineyards located at different altitudes some of which can reach above 3,000 feet. There are many mountain systems in Spain spread all over the country, such as the Iberic, Cantabrian, Sierra Morena and Central, which will provide different expositions, soils, and most importantly a marked diurnal temperature variation that will aid slow ripening. The south of Spain is very hot as well as the Mediterranean coast, which creates ideal spots for Syrah, Grenache or Garnacha, Monastrell and Cariñena, all of these thrive in a hot climate, and some of them are usually blended with French varieties.

Regarding Tempranillo, it is Spain's flagship red, it is a super versatile grape that can produce light everyday reds like most Rioja Joven or Crianzas to big bodied reds like the powerful reds from Toro. Rioja produces in my opinion the most elegant Tempranillos of all. While, Ribera del Duero produces Tempranillo “on vitamins”, meaning they usually have bigger bodies than any Rioja and are so worthwhile. If you like Southern Rhone wines, then try a Priorat or Montsant, both regions produce big reds (Powerbombs) made of Garnacha and Syrah, which are the very best from Spain.

Regarding whites, Albariños, are not only delicious, but also very affordable, and Ruedas (Verdejos) are some of the most flavorful whites from Spain, feel free to revise my posts about these two styles of whites written last year. The sparkling wines in Spain are known as Cava with most important producers based in the Penedès region, following the example of Champagne, these are wines made with a second fermentation in the bottle and aged on their lees (dead yeasts). They are made with their Spanish native varieties: Macabeo, Parellada and Xarel-lo, though some may add Chardonnay or Pinot Noir to the blend. Spain is also a great source of wonderful rosados (rosé wines) usually made from Tempranillo or Garnacha, DO Navarra is very well known for this specialty, though DOC Rioja also produces some of these too. Prices are also very affordable, starting at $15 and up.

See below your cheat sheet table to the top regions in Spain: 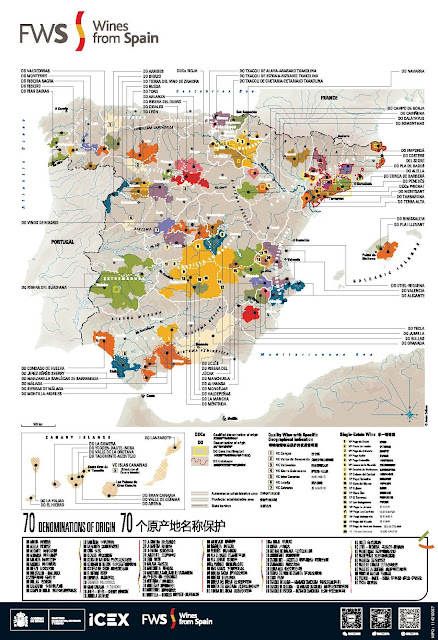 Map courtesy of ICEX and Wines From Spain.
These are 4 great examples of Spanish wines! so do give them a try. 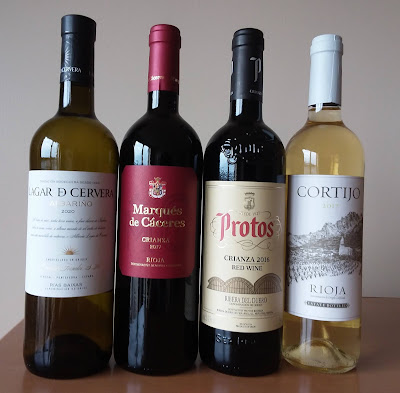 So, there you have it! a concise tour through Spain, stay tuned for future posts, where I plan to explore the wines of Rioja and Ribera del Duero coming soon to your inboxes. Until then, Cheers! or as they say in Spain: Salud! Silvina.