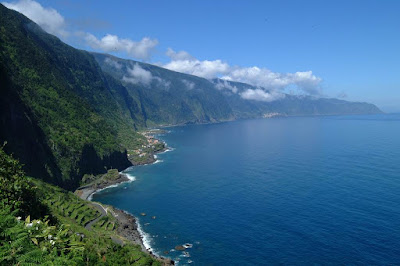 Madeira is a fortified wine that has been produced from centuries, and it is also the Portuguese island located 625 miles from Europe, close to Morocco, to the north of the Canary Islands. History tells us that the island of Madeira was discovered in 1419 by Joao Goncalves Zarco, Tristao Vaz Teixeira and Bartolomeu Perestreto. These three captains founded a port (Funchal) on the island so that the ships that were going to the Americas could stop for provisions, and of course among them, wine.
Madeira was very popular in the US and loved by our founding fathers: George Washington, Thomas Jefferson, Benjamin Franklin, John Adams were all Madeira fans, and America’s Declaration of Independence was celebrated with plenty of Madeira, which was very much in fashion during that time.

Now, what makes Madeira wine so special? from a viticulture's point of view, the island seats on a vast volcanic mountain range of basalt soils (made of cooled lava). Only 500 hectares are dedicated to grow vines, a task that is not easy to do, for starters, the island is full of very inclined cliffs, so viticulture can only take place in small plots and by creating terraces by hand, similar to those found in the Douro region (Portugal). Then, the subtropical climate creates many problems, not only it is very hot in the summer, it also rains a lot, thankfully most rain falls in the winter when the vines are dormant.  Humidity creates other problems such as mildew and botrytis bunch rot and this is why most vines are trained in high pergolas so that air can circulate. Then there is the Leste wind, that comes from Africa and that can cover the grapes in sand, raising temperatures to 100 °F for weeks. Viticulture is possible in the island,mostly thanks to altitude with vineyards planted up to 5,900 feet. Regarding vinification, Madeira wines normally start their life as any other wine with a regular fermentation but in the middle of it, alcohol/ brandy is added to halt it; depending when the alcohol is added, there will be more or less residual sugar in the wine, creating styles that can go from dry to rich (sweet). Depending on the amount of alcohol added, Madeira wines can have from 17-22º of alcohol.

There are four noble (indigenous) varieties in Madeira, which are planted according to climate: Sercial makes the driest of all styles is planted in the north, in the coolest vineyards.  Verdelho makes a medium dry style is planted in warmer vineyards but still in the north. Bual (Boal) and Malmsey make the richest (sweet) styles, are planted in the south, in the warmer regions. There’s also a fifth grape: Tinta Negra Mole, used to make entry level wines and Colheita (vintage wines).

Historically, Madeira was not always a fortified wine, the problem was that upon arrival of the wines to their destination (the Americas), they soon deteriorated, so producers realized that the addition of a little bit of spirit was necessary to survive the long sea trip. (Something similar happened with another fortified wine: Port). Later, East Indian Trading shippers saw that the best wines were those that had crossed the equator, it seemed that the extra heat and long distance travel had a very positive effect in the wine, aiding the slow oxidation process that yielded Madeira's typical rancio aromas: caramel, toasted nuts, toffee, brown sugar, molasses, cocoa, dates and spices (cinnamon, ginger and all spice).  These first Madeira wines were known as Vinhos de Roda (because they went around the world). Now, taking the wines back and forth on long sea trips to get these delicious flavors proved to be kind of expensive, and pretty soon producers tried to find ways to replicate this, without the need of taking the wines out of the island.
One way to reproduce this special maturation/oxidation is the use of the estufagem/estufas, which are large vats with heating coils that reach temperatures of up to 131°F, a process that is done slowly to prevent burnt flavors and that usually lasts for 3 months.  The second method used is the Armazems de calor, where wines are aged in large casks in rooms like saunas, where they are kept from 6 months to 1 year.  And then the third method is the Vinhos de Canteiro, this last process is used only for the best wines. Wines are kept in producers' lodges under the heat of the madeiran sun for a minimum of 2 years, but most producers age the wines for much longer, some madeiras can be there for 20 years or more. Whatever method they use, the heating of the wine will cause the slow oxidation and concentration of the aromas of Madeira wines. After the heating process, most wines are often aged in oak barrels.

Madeira styles can be divided according to their sweetness: they could be dry (less than 25 gr of sugar), medium dry, medium sweet, medium rich and rich or sweet (more than 100 gr of residual sugar). Sercials are mostly dry, Verdelhos could be dry or medium dry, Boal tend to be medium sweet and Malmsey are the sweetest wines.  Keep in mind that even the sweetest wines won't be cloying, since all Madeira styles boast their dose of natural acidity that balances their sweetness. All of them will also have high alcohol, they are fortified wines after all! which will give them full bodies and long finishes. Like Ports, Madeiras are blended wines from different vintages and can be divided into several categories,but these below, are the most important: Rainwater Madeiras: these are the entry level wines, wines that could be off dry or medium dry, usually aged for 5 years. They owe this name to wines that were diluted with rain water during trips to the Americas. Then, we have the wines that have an indication of age: these could be 5, 10, 20, 30, 40 or 50 years old. All of them are made of one of the four noble varieties: Sercial, Verdelho, Boal or Malmsey. There’s also the Colheita and Frasqueira/Garrafeira category. These are wines from the same harvest/ vintage that have been aged for 5 years in cask (for Colheita) and 20 years in cask for the Frasqueira. Similar to Sherry, some Madeiras are aged in Soleras. In the Solera system, wines are mixed fractionally, by adding new wines to old ones, blending different vintages.

Because Madeira is an oxidized wine, i.e. is exposed deliberately to oxygen and heat, it is almost indestructible and can last for a long time, even after being opened. Just keep them in a cool and dark spot in your house. Enjoy Sercial and Verdelho slightly chilled, and Boal and Malmsey at room temperature.

Thank you so much to Bartholomew Broadbent for providing an outstanding  selection of samples to taste. The winos really loved them!
Because la Wina has a sweet tooth, these 3 were my favorites: all 3 are made with the Canteiro process. 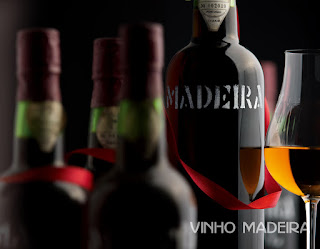 Thanks to IVBAM for providing the pictures.
at March 03, 2020