Recently, I was introduced to two wonderful wines from Bodega Tesalia, a boutique winery from Arcos de La Frontera, Spain. 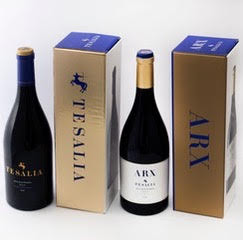 ARX 2016 and Tesalia 2016 are both “Super Vinos de la Tierra” de Cádiz,  and I say super, because this reminds me of what happened with the Super Tuscans of Italy in the 70’s.  More and more producers all over the world, choose to experiment by producing wines with different varieties or blends, not allowed by law in their appellations. The results are unique and concentrated wines, that end up being sold as “fancy Vino de La Tierra”.


Currently, Bodega Tesalia produces two wines that are blends of native and international varieties.  In the case of the ARX 2016, the blend is composed of 50% Syrah, 35% native Tintilla Rota and 15% Petit Verdot. In the case of the Tesalia 2016, the blend changes to showcase Petit Verdot (65%), 25% Syrah, 5% Tintilla Rota and 5% Cabernet Sauvignon.


11 hectares of the Golding family owned vineyards are dedicated to wine production. All the vineyards are located at the foothills of the Grazalema mountains, a mountain system that is climatically influenced by two seas (the Mediterranean and the Atlantic). Soils rich in clay and chalk, end up yielding wines with ample structure and unparalleled elegance.
Enologist and flying winemaker Ignacio de Miguel Poch, brings all his experience to Bodega Tesalia, having worked and learned from the very best, including Emile Peynaud, Michel Rolland and Carlos Falcó, another great Spanish producer of  Syrahs and Petit Verdot wines. He puts extra care in the handcraft of these two wines. All fruit is hand harvested at night to preserve its freshness, after a careful fruit selection, comes a cold maceration for 4 days to extract aromas and color, followed by temperature controlled fermentations (partially in barrel and stainless steel) for  20-25 days. After pressing, comes the blending of the different varieties and aging in new French oak for 12 months.


The ARX 2016 shows aromas and flavors of bold black fruits: plums, blueberries, chocolate with smooth tannins and a long finish. The Tesalia 2016, offers ripe blackberry, figs and spices in a plush velvety body. Both wines are imported to the US market by Wine Symphony, https://www.winesymphonyinc.com/.

With these two samples Spain has proved once again that it can produce great quality wines with native as well as international grape varieties or as in this case a blend of both. I wouldn’t be surprised if this winery is granted their own Dominios de Pago appellation, in the near future.

Thanks to Cristina Aldea and Natalia Golding for the samples and pics.