Vintages and Why They Are Important

One of the things I like about wine is that you are never done, not only because there is so much wine out there to taste, and way too many options! but mostly because wine changes according to vintages, and with each new harvest, we get a new opportunity to taste and discover a new version of our favorites.

Let’s face it, the flavor of our wine depends very much on what happens in the vineyards that particular year. Did the vines get plenty of rain?, enough sun? Did grapes have a chance to ripen to perfection? Was it too dry or too humid? Was it so hot that wines lack the balance of previous years? All of these questions are vital to determine a vintage and wine critics and wineries take this very seriously. They even put a number on the vintage, like they do with wines, some will get an 88 (a so and so vintage) and others 99 (a great vintage).

When talking about vintages, we must distinguish between climate and weather. Climate is the weather patterns that repeat themselves year after year and that will allow us to classify a region into a specific climate zone. That knowledge will help us decide which varieties to plant and in which places. For example, we hear the climate of Burgundy is cool continental, ideal to grow Chardonnay and Pinot Noir, while in Provence, it is Mediterranean with warmer temperatures and very dry weather, ideal for Grenache. In California for example, they use the Winkler degrees system created by the University of Davis, which is based on average temperatures during the growing season. The different wine regions are divided in 5 zones or from I to V.  I is the coolest and V the hottest. To give you some context, Champagne, which is a cool region, is region IA, Burgundy IB, Piedmont  II, Rioja III, Languedoc V, etc.

Weather, or I should say vintage weather, is all of the specific conditions of one particular year. Which normally vary every year and they affect the final crop of that year. A cool growing season may produce more acidity and less alcohol, or too much heat during the growing season, the exact opposite. In other words vintages are defined by the weather phenomena in a specific growing season.

Below, you will find some of the most remarkable vintages of the most important wine regions in the world. In general, expect to find better wine quality overall in these years and in some cases expect to pay a bit more for these wines too! (especially at premium level).

Now, if you want to learn more about vintages in other regions, Wine Spectator® creates and publishes every year this wallet vintage chart.
Feel free to download it, print it and carry it with you. Many thanks to the magazine for allowing me to add their link in my post.

An excellent vintage is not only important to get information about the style of the wine, but it will play an important role when buying wine as an investment, since excellent vintage wines fetch higher prices. They will also have a better chance to yield higher earnings on your investment too!  On the other hand, a so and so vintage sometimes will drop the price of an expensive wine so much, allowing you to acquire it.
Yet, nothing is set in stone… since even in bad vintages, there are very talented winemakers that know what they are doing in the vineyards and still make wonderful wine in spite of all the adverse weather.

In any case, knowing about vintages can only help you, allowing you to make better wine choices in your future. Cheers! Silvina 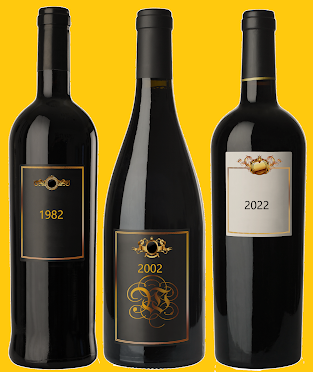