Located in the province of Castilla León in Spain, Ribera del Duero is about 100 miles drive north of Madrid. It's much smaller than Rioja and has about 21,000 hectares dedicated to vineyards, all of which are located in the valleys surrounding the Duero river. This river, the second most important of Spain, runs from the province of Soria and moves west across the meseta (high plateau of central Spain) ending its trajectory in Portugal (where it is known as Douro, producing ports and very good dry reds there). 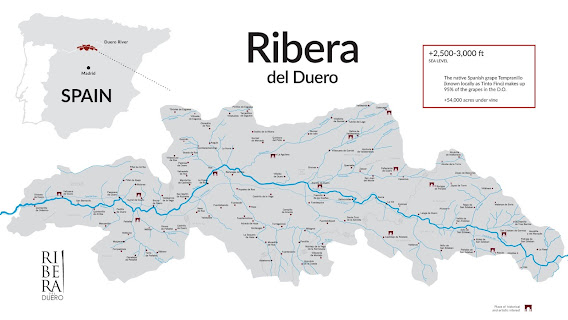 Ribera del Duero is known mostly for its delicious and robust reds and like Riojas, these are made from the same grape variety:Tempranillo, known here as Tinto Fino.  Garnacha, Cabernet Sauvignon, Merlot and Malbec are also allowed, but only in small quantities; since each wine must have, by law, a minimum of 75% Tempranillo/Tinto Fino in the blend.

The climate of Ribera del Duero is continental with very hot summers, easily reaching up to 100º Fahrenheit during the day. Temperatures however, go down at night due to altitude, that plays a very important role here. Most vineyards are planted higher than in Rioja too, between 2,500- 3,000 feet. Ribera del Duero is also much warmer, producing reds that are usually more extracted, luscious, and ripe, I normally describe them as “Tempranillo on Vitamins”, their power and concentration come mostly from very old vines, some of which are between 50 to 80+ years old.

There are two types of soils in Ribera del Duero, near the river, we find marl, riverbed stones and sediments and on the slopes, limestone, and clay. The river has an enormous impact in the whole area, especially during the Spring, when it moderates temperatures, keeping the area warm and preventing frosts that otherwise will seriously affect yields.

Like Riojas, Ribera del Duero wines are aged in oak and bottle before release and are classified in the following categories:

* Joven: without any oak aging.

* Crianza: one year in oak and one in a bottle.

* Reservas: 3 years minimum, with 1 year in oak, the rest in a bottle.

* Gran Reservas 5 years minimum with 2 years in oak and the rest in a bottle. Keep in mind that most producers can/will choose to age for much longer times. Aging used to happen in American oak, but nowadays more and more wineries are choosing French oak or a mix of both.

Over 300 wineries make wines in this region. Some of which are very expensive; a clear example is the Vega Sicilia Unico, whose current vintage costs $500 + per bottle; it is by far one of the best reds of Spain, a collectible item and a treat we all should taste in our lifetimes. Other top producers are Alejandro Fernández (Pesquera) and Peter Sisseck (Pingus & Hacienda Monasterio), whose wines impress wine lovers at all price levels. In general, this region produces incredible quality wines, and it’s so much more than "the other Tempranillo appellation", it has a well deserved reputation of its own, which has translated into more and more brands becoming widely available in the US.

I had the pleasure of receiving a bountiful of Ribera del Duero samples, and many from wineries I didn’t know. Though, I must warn you, in general, Riberas are a bit more expensive than Riojas, but so worthwhile! Here are some of my favorites that I have tasted recently: 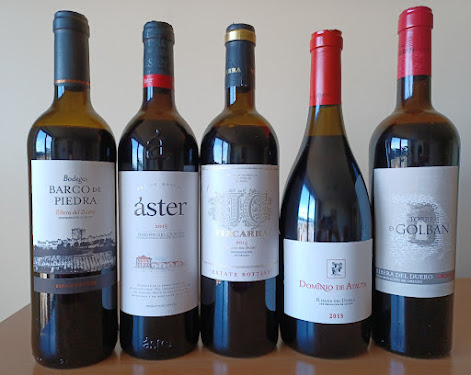 Once again thanks to all producers and importers for the samples and to the CRDO Ribera del Duero/ Riberaruedawine.com for the map.