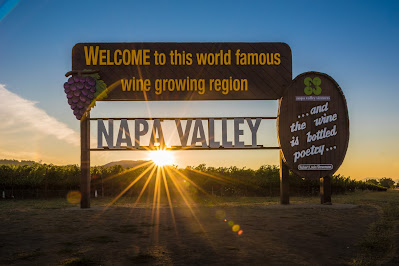 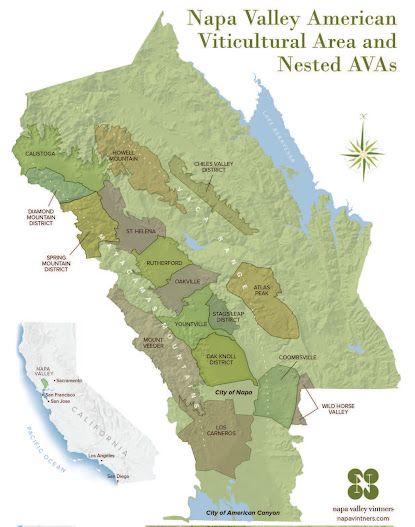 Let’s take a brief tour through some of the most important subregions in Napa. In the south we find Los Carneros, here vineyards are planted low, from 0-700 feet, this AVA, is very much influenced by the Pacific cool breezes and fogs coming from St Pablo’s Bay, which makes this spot ideal to grow Pinot Noir and Chardonnay, both used to make sparkling and table wines. Continuing in the southern part of the valley but going north, we have the AVAs of Coombsville and Oak Knoll, also influenced by the fogs and cool breezes, Cabernet Sauvignon from these AVAs are elegant with velvety tannins and herbal notes. Coombsville soils are mostly volcanic (tufa) and have some elevation, up to 1,000 feet.
Continuing north, we find Yountville, which is a bit warmer but still very much influenced by the fogs. Soils here are mostly clayey, heavy, deep, and damp and better for Sauvignon Blanc than Cabernet. There are some producers that grow Cabernet Sauvignon here, but these are planted on pockets of alluvial soils (gravel) better for this variety.  Then comes Stag’s Leap (home of the winery with the same name), which has both alluvial fans and volcanic soils that will yield beautiful Cabernet Sauvignons, with good acidity and smooth tannins, showing red fruits and less herbal notes than in Coombsville. Continuing to the mid valley, we find the classic AVAs of Oakville and Rutherford, moderately warmer than the previous southern AVAs, we find alluvial fans (gravel soils) in the vineyards on the west and volcanic soils in vineyards on the east. The Cabernets here are fruit forward, fleshy, very much age worthy but also drinkable upon release. There are some high-altitude vineyards in these AVAs too, that will yield similar wines to those coming from the Mountains (more intense and firm). Some of the most important and prestigious vineyards/wineries are located here (Robert Mondavi, Opus One, Staglin, Peju, St Supery, Caymus, Inglenook, etc).
Moving up north to St Helena and Calistoga (which is the warmest part of the valley) we find warm temperatures to grow powerful Cabernet Sauvignon, Zinfandel and Petite Syrah. Some of the very hot sites in the valley are located here, so harvest happens earlier than in the AVAs in the south. Finally, we have the Mountain AVAs. If you want the biggest, powerbomb reds, go to the Mountain vineyards!  Mostly because grapes that are exposed to the elements: cold, snow, wind, high altitude yield thicker skins, small berries, and bunches, which translates to a higher skin to juice ratio, producing more concentrated and extracted wines. We find very steep slopes here and high elevations that are above the fogs, which means that these vineyards see more sunshine than those located below on the valley floor.  Starting in the southwest we have Mount Veeder, which is cooler in the south, with vineyards enjoying a long and slow ripening season and warmer in the north. Moving up, we have the Spring Mountain, which is probably the coolest of all, producing very elegant but also intense wines. Further north, we find Diamond Mountain , which is a bit warmer, similar to north St Helena or south Calistoga but the wines will have more tannin and power here.  On the east of the Valley and north, we have Howell Mountain that has cooler sites with some warm pockets, volcanic soils, lakes and some of the highest elevations vineyards in Napa. Continuing south and east, comes Chiles Valley, which is a bit warmer, with fruit ripening earlier and less steep vineyards that make farming easier.  And finally, the last mountain AVA is Atlas Peak, it’s cooler and one of the last places to ripen, influenced again by the cooling breezes and fogs from the Pacific.
As you may see depending on the location, you will find different styles of Cabernet Sauvignons, featuring unique textures, acidity, tannin, and character profiles that may go from red fruits to black and purple fruits. In general, fruit from the valley floors will yield affordable and more approachable wines, soft with round tannins, while fruit from the benches and especially the mountains will have strong tannins and extracted structures that require cellar time, plus some of these can be pricey as you may see below. 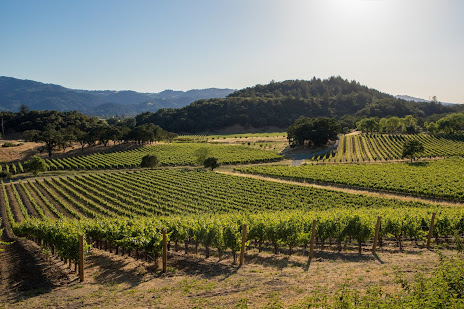 The wine industry in Napa is relatively new, with wine production starting less than 200 years ago, and like it happened in Chile, Argentina, and Mexico, the first wines were made from Mission grapes brought by Mexican priests. Now, vitis vinifera production happened later with the immigration of European pioneers such as: Hamilton Crabb, Joseph Beringer, Charles Krug and Gustave Niebaum. By 1889, there were 140 wineries in Napa but then came a series of fatal events, in 1890 phylloxera, the deadly louse that ended the vineyards in Europe, arrived to Napa, decimating most vineyards, in 1906 the San Francisco earthquake affected the area, followed by World War 1 in 1917 and the worst of all, in 1919, the Volstead Act which brought alcohol prohibition to the US and with this the disappearance of most wineries in Napa, since only a few survived by making wine for sacramental purposes.
However, Napa Valley Vintners were resilient and organized themselves in 1944 creating the Napa Valley Vintners Association. Another important milestone that paved the way for Napa to become the first American AVA,  happened in 1976, when the Judgment of Paris took place, this was a blind tasting competition organized by the recently deceased, Wine Critic Steve Spurrier (UK), who had the great idea of comparing California with French wines, and of course, for those that don’t know this, two Napa valley wines won the competition, Stag’s Leap Cabernet Sauvignon 1973 defeated the most famous Grand Crus in Bordeaux and Chateau Montelena Chardonnay 1973 defeated the best Burgundies. This story was published by the Times, and the reputation of Napa as a quality wine appellation was born! For the first time two new world producers proved they could make wines greater than the French!  Nowadays, about 465 wineries continue to produce wine in Napa Valley, 95 % of all wineries are family owned and run, showing how much care and excellent quality there is in this appellation.

Here are some of my favorite Napa wines, chosen from the selection I received during the last edition of Hopwines.

Of course I could include many more, but I'm running out of space! Instead I will invite you to continue tasting and exploring this incredible appellation. Thank you to all the wineries that provided samples for me and to the Napa Valley Vintners Association for the use of maps and photography.
Happy Independence Day America! We should definitely celebrate this 4th of July by opening a bottle of Napa wine. Cheers! Silvina.
#thoughtsoflawina #napavalleywines #WineWednesday
Remember to subscribe to keep receiving Thoughts of La Wina in your inbox and to follow me on Linkedin and Instagram @Silvinalawina.
at July 02, 2021