Biodynamic Wines, what a fascinating topic! Each day, each of us do our share to help mother Earth, we recycle, we try to eat organic produce and fruits, maybe we drive electric cars, shouldn't we drink Biodynamic or Organic wines?

Let me start by saying that the trend is to see more and more wineries switching to sustainable approaches to viticulture, thinking long term and taking responsibility, fully becoming aware that what we do to our land today will affect future generations.

But, before we start exploring Biodynamics, it’s important to distinguish between a few terms used and the differences between Conventional, Organic and Biodynamic viticulture.  So, Conventional Viticulture is basically the industrial side of viticulture, it’s what most wineries do. They have a vineyard with the purpose to make wine, in most cases it will be a monoculture, meaning only vines will be grown in these soils and whenever there is a problem, such as mildew, fungus, pests, weeds, etc, they will treat the land with your usual cocktail of chemicals: pesticides, herbicides, fungicides, fertilizers, etc.  This is not only bad for mother earth but also for us, since we are putting in our bodies all these chemicals!

Then, we have Organic Viticulture and here, no chemicals or synthetic products are allowed to treat the vineyards, however they still use copper, sulfur and other vegetable-based products. The Organic certification is very regulated, each country sets a series of rules that wineries need to follow to be certified as such, and here we need to distinguish between wines made from organically grown grapes from organic wines. So, in the first case the grapes will be grown without any chemicals but in the winery, the winemaker will continue adding additives and using all the processes like they do in conventional winemaking. Now, Organic wines are different, since they will use organic grown grapes and also reduce or eliminate non natural additives. They will still use sulfites (in lesser amounts) and natural additives and yeasts, though in some cases, lab created yeasts will be also allowed. Organic Viticulture uses IPM or integrated pest management, which allows beneficial/ predatory insects in the vineyard to naturally control pests affecting the vines and the planting of cover crops like peans, beans, etc , also used to benefit the biodiversity of soils and to prevent the erosion that takes place in monoculture farms. 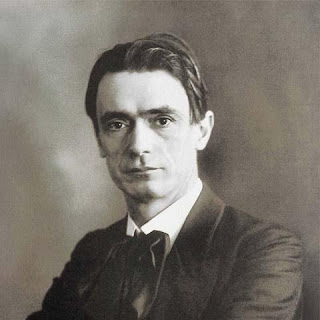 Now, the Biodynamic movement was founded by Rudolph Steiner, (his picture on your left).

An Austrian scientist, poet, philosopher, visionary, creator of, among many things, the Waldorf education system, and father of the Anthroposophy's spiritual movement. He foresaw the troubles that the use and abuse of chemicals was doing to the soils, and came up with a more natural solution to resolve all type of farm ailments. He was convinced that the industrialization of agriculture would eventually cause the self-destruction of humankind and in 1924, he offered a series of 8 lectures to farmers and agriculturists, in Poland. Unfortunately he died a year later, without having much time to practice Biodynamics. However his many followers did, such as Dr. Ehrenfreid Pfeiffer, whose book “Biodynamic Farming and Gardening” was published in 1938. Pfeiffer immigrated later to American where he continued his research and was able to spread the word to a wider audience. Also, important is the work of Maria Thun, who created the Biodynamic calendar, which was published for the first time in 1963 and is still published/used today. This calendar sets up a schedule of activities to do in the farm/ vineyards, where days are divided into 4 different categories: flower, root, leaf and fruit days (it is known that Biodynamic winemakers prefer to conduct wine tastings exclusively on “fruit days” since these are the days when wines are supposed to taste better). So basically, planting, pruning, harvesting, spraying, etc, are done at different times during the year,  following the lunar and planets cycles which was the cosmological vision of Steiner, aligning the vineyards to the rhythm of nature.

Biodynamics started first as an agriculture movement, but it was not until the 1980s’ that we started seeing biodynamics applied to viticulture. The movement grew momentum first in France, with winemakers such as Nicolas Joly who dedicated his life to promoting Biodynamics and from there, it spread to all over the world. Nowadays, we can find Biodynamic vineyards in countries such as Argentina,  Austria, Chile, Germany, Hungary, Italy, New Zealand, Portugal, South Africa, Spain, UK and of course, the US (California).

In 1997 Demeter was created. Demeter is the body/ organization that certifies Biodynamic vineyards and farms.  First, Demeter regulated Biodynamic viticulture but later also stipulated regulations for Biodynamic winemaking, specifying the type of additives allowed in any wine certified as such. For example, the use of sulfur dioxide is always less than what is allowed in Organic winemaking and almost half the usual amount allowed in Conventional winemaking. Another difference is that Biodynamics allows the use of natural/ indigenous yeasts only, lab created yeasts are forbidden; the stabilization of wines can happen only by using bentonite or cream of tartar, and biodynamics doesn’t favor the use of machinery in the vineyards, no chemical stabilization of tartrates is allowed, or the addition of must concentration or enzymes, either.

Returning to Biodynamic viticulture, the vineyards here, are treated with the natural preparations that were formulated by Steiner himself. Remember that he believed that the farm/vineyard was a closed system and that all maladies had to be resolved/treated using natural products easily found inside of it. Almost a 100 years later, different studies have shown that biodynamic soils have healthier humus, top soils and subsoils than certified organic vineyards.

Without giving the specifics of each formula, let’s take a look at some of these preparations. Steiner created a total of 9 preparations, 3 sprays that he recommended to be used 2- 4 times a year and 6 preparations that are used as compost.

The first spray is known as BD 500 or Horn Cow Manure: he chose cow manure for its texture, though sheep and horse manure could also be used. Cow manure is filled into cow horns and buried in the soil during winter, when according to Steiner the earth breathes in. It is then dug up and mixed (dynamised) with water, creating a spray that is used during spring and summer, when according to Steiner the earth breathes out. This spray is good for soils, subsoils, roots,  bacteria and worms that live in the soil. It also regulates lyme and nitrogen content.

The second spray is called BD 501 or Horn Silica: Ground Silica (quartz) is introduced inside cow horns and buried in the summer. Then again it is dug up and dynamised (mixed with water) and sprayed to the vines instead. (This second preparation is for the upper part of the plants: shoots, leaves, etc). This spray improves photosynthesis, promotes better plant absorption and assimilation of carbon dioxide, it also encourages ripening. It is usually sprayed. 2-4 times a year before flowering and later before the harvest. The last spray is called BD 508 is a horsetail preparation. Horsetail is an herb that has antifungal properties and balances the watery elements in plants and soils helping them become resistant to pests and diseases. This preparation is usually sprayed when upcoming humid weather is about to happen. The last 6 preparations BD 502-507 use different flowers and herbs as ingredients such as: Yarrow, Chamomile, Stinging nettle, Oak Bark, Dandelion and Valerian. These are used to make composts that have different restorative properties to the soil.

In February, I had the pleasure of virtually attending the first edition of Hopwine dedicated to Organic and Biodynamic wines. I received my mini bottles at the beginning of March, so here are some of the wines that impressed me. It’s important to keep in mind that this is still a very small (boutique) category, according to the latest statistics only 4.5 % of all vineyards in the world have these types of certification.*

To find these, make sure you visit wine-searcher.com. Keep in mind that some of these producers are looking for importers/ distributors in the U.S, so not all of them are currently available in the U.S.

Regarding the taste/ flavor of these wines, critics have preferred not to express an opinion about this matter, mostly because they taste blind and therefore it’s very difficult for them to tell just by tasting, which wines come from organic or biodynamic vineyards. However, there is a study by Professor Delmas  called “Does Organic Wines Taste Better, an Analysis of Critics’ Ratings”, that was published in 2016 by the Journal of Wine Economics. According to Delmas, wines from Organic and Biodynamic vineyards got better reviews/scores. She reached this conclusion, after analyzing 74,000 California wine reviews, by the three top Wine publications: Wine Spectator, The Wine Advocate and Wine Enthusiast. Meaning that fruit grown without chemicals have better flavors and will therefore, yield better wines.

One of the problems that drive consumers away from these categories, besides disinformation, is the use of less sulfites. Sulfites are preservatives used to prevent oxidation at different stages in winemaking. Less sulfites in wines not only affect their ageability/ shelf life, they also give wines their funky aromas and appearance, which have created a stigma among consumers.  This is also the reason why some producers opt not to advertise themselves as biodynamic or organic on their labels, requiring us to do some research.

However, as many of us become more and more conscious about what we put in our bodies, more and more producers will follow suit. Personally, I believe Biodynamic and Organic viticulture is much easier to practice in warm or dry regions, because then diseases are less abundant here, this is why there are plenty of organic and biodynamics wine producers in California, Southern France and Australia.