Chile can be considered the Bordeaux of South America, since its wine industry,  was very much influenced by the French, and for a very long time was known as a source of inexpensive Cabernet Sauvignon and Bordeaux blends, a reputation that Chile has successfully shook from its shoulders.

The first vine cuts though, were of Criolla/ País grapes, a grape that Spanish monks brought to Chile to make sacramental wine, a similar phenomenon to what happened in California and Argentina. But, starting in the second half of the 19th century, Chilean producers, impressed with Bordeaux Grand Crus started planting French varieties. Today, over 137,000 hectares are dedicated to wine production, Cabernet Sauvignon is the most important variety, followed by Merlot, Carménère and Syrah.

Chileans have an appellation system based mostly on geography, but like in every other new world country, viticulture and vinification are not regulated here as it is in Europe.  Chilean wine growers are free to grow and plant what they want and they do so according to demand and of course climate. 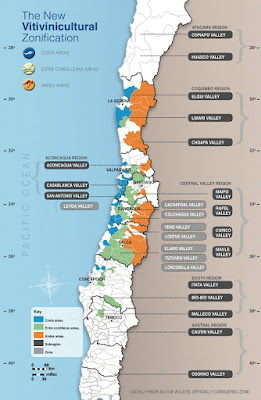 Chile is a very narrow country, as we may see in the map (courtesy of Wines of Chile). It has the shape of a long strip that extends for 2,600 miles. To the north, we find the Atacama desert, which is very dry and hot and is well known for its production of Pisco. To the west, the cool Pacific ocean and a low chain of mountains known as the Coastal range which can have altitudes up to 10,000 feet. And to the east, the Andes mountains which separate Chile from Argentina with altitudes of 13,000 + feet. In the middle, sandwiched between the Andes and the Pacific ocean, we find numerous valleys crossed by rivers that go from east to west, (from the Andes to the coast). This astounding combination will yield multiple terroir, topography, expositions, and microclimates within Chile, suitable for viticulture.

Climatically the country can be divided in 3 zones, where the north is hot and dry, the middle, Mediterranean (a climate between Napa and Bordeaux) and the south cool and wet. Yet, Chilean producers came up with a new classification for their terroir, considering the differences from west to east 1) In the Coastal areas (Costa) of Chile, located on the west, these areas are influenced by the cooling Humboldt current, bringing cold air, dry winds and fog. This current will provide ideal conditions for cool climate varieties such as Pinot Noir, Sauvignon Blanc and Chardonnay. 2) In the middle, between mountain ranges (Entre Cordilleras) we have a second chain of mountains lower than the Andes, and many flat valleys with altitudes between 300-800 m. This is exactly where the most important red appellations are located in the Central Valley of Chile and to the south of Santiago.  You will recognize these names from your labels: Maipo, Rapel Valley (includes Colchagua and Cachapoal), Curico and Maule. The most important grape varieties here are Cabernet Sauvignon, Merlot and Carménère.   And finally 3)To the east, Alto (High) vineyards are affected by the alpine influence of the Andes.  On the labels, usually categories 1 and 3 are indicated, for example a wine can be a Colchagua Costa, (meaning influenced by the west) or  a Maipo Alto, (meaning influenced by the Andes on the east) wines made in the middle, in the Entre Cordilleras, usually don't have any specification. 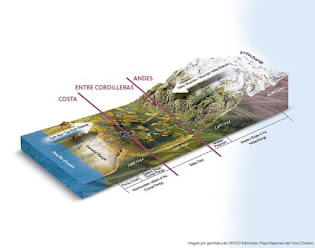 See sketch of the terroirs, courtesy of Wines of Chile, featuring the three categories: Costa, Entre Cordilleras and Andes/Alto.

Chilean soils vary, in the Aconcagua region in the north are mostly alluvial (sedimentary), in the Maipo and Rapel Valleys are mostly loam, clay and sand and in the South in Maule and Bio Bio, volcanic. Besides this, Chile is also phylloxera free, meaning the deadly louse never arrived in Chile and with that, there was no need to graft vines, keeping their original vinifera roots. They, however have, other challenges such as downy and powdery mildew and nematodes, yet organic and sustainable viticulture is widely practiced here. In recent years, drought has become a problem, especially in the north and center, but irrigation is allowed, and like in nearby Mendoza, usually comes in the form of melted snow from the Andes.

66% of the total production is dedicated to making red wines, especially from Cabernet Sauvignon, Merlot, Bordeaux blends and Carménère. Carménère was at the very beginning, identified as a late ripening Merlot, until ampelographer Jean Michel  Boursiquot’s research proofed otherwise. Syrah and Pinot Noir are also important.

Starting in the late 80’s Chile saw a change in quality in its wines, thanks in part to investments in vineyards and wineries. Domestic producers, on their own or in joint ventures with foreign wine producers worked together to prove that Chile could produce more than $10 wines (I'm sure some of you are familiar with Gato Negro). Some of these ventures include top names such as: Robert Mondavi, Miguel Torres, Château Lafite Rothschild, etc.

Now, if you are looking for red Chilean wines, you need to know that though producers are spread all over the country, most of them are concentrated in the middle, in the Central Valley. However in the north, there are important appellations that produce very good red wines, like the wonderful and elegant Syrahs from Elqui and Limari Valleys featuring peppery and ripe black fruit aromas or Cabernet Sauvignon, Carménère and Bordeaux blends from the Aconcagua Valley, where famous Chilean producer Viña Errazuriz has its base and makes its famous Seña wines there.

Carménère, a grape that had become extinct in Bordeaux reached a new height in Chile,  and is their signature grape variety, producing savory and spicy reds with lush and textured bodies, balanced acidity and velvety tannins.  Important enclaves to look for are Peumo, Alto Cachapoal and Apalta. Cabernet Sauvignon, the most popular red grape, produces wines that show medium + to big bodies with balanced alcohol and acidity, and muscular tannins, showing on the nose black currant, mint and olives notes. Puente Alto, Pirque and Alto Maipo produce some of the best samples. Besides the outstanding Cabernet Sauvignons like Concha y Toro Don Melchor, Casa Lapostolle Clos Apalta or Viña Almaviva, I also recommend you to try the wines from the Vigno appellation. This appellation is located in the Secano area (Maule); here impressive, concentrated reds are made from dry farmed Carignan vines, that are also some of the oldest in Chile (30 years +).

My Wine Recommendations: Once again, I would like to thank all the producers and importers for providing a huge selection of samples. A special thanks to Wines of Chile for sending important data, maps and pictures. 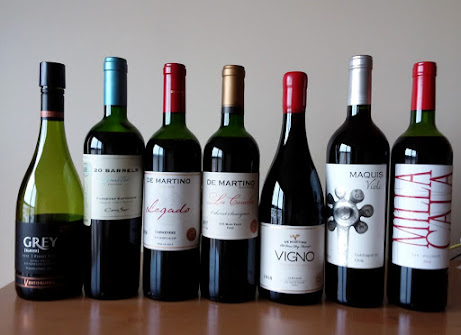 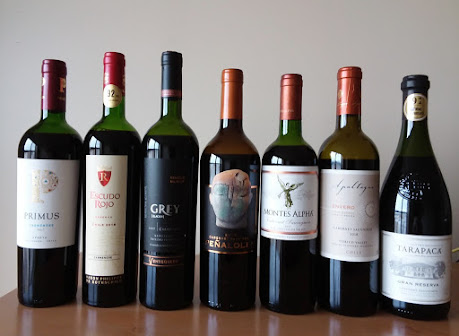 So there you have it! your mini tour around Chilean red appellations. Hoping you will enjoy some of these fine reds soon! Cheers, Silvina