The Sparkling World of Cava

Cava is the sparkling wine from Spain. It is made using the method Champenoise or Traditional, with the second fermentation that creates the bubbles, happening in the bottle. Cava by law, can be produced in many provinces of Spain, including Valencia, Aragon, Navarra, Rioja, Basque Country and Catalunya. But Catalunya is by far, the most important location in Cava production, since most of wineries are located here.

These fantastic wines are a very good choice if you want to save $$$ when choosing a sparkling. Cava is more affordable than Champagne, though in some cases as we shall see, is made from other grape varieties, usually found only in Spain. The quality of these wines has been increasing considerably in the last 20 years, and now we find very good samples that see aging on lees and longer maturations similar to top Champagne.

The first Cava was created by Josep Raventós, owner of Codorníu, who after traveling in Europe, visited the Champagne region and decided to replicate this wine at home. He did this in 1872 with great success, it was known then as Champaña. After Spain entered the European Union in 1986, producers were forced to stop using this name, since true Champagne can only come from France, so they started using the name Cava for this category instead, which means cellar in Catalan.

In the 1880s when phylloxera devastated the vineyards of Catalunya, a lot of the dead vines were uprooted and replaced with varieties grown especially to make Cava. Most of the Cava production takes place in what is known as the capital of Cava, Sant Sadurni D’ Anoia, located 27 miles southwest of Barcelona, in the Penedès region. The area is influenced by the Mediterranean sea nearby, the presence of the Montserrat mountains provides altitude and coolness. Most vineyards are planted between 200-800 meters. 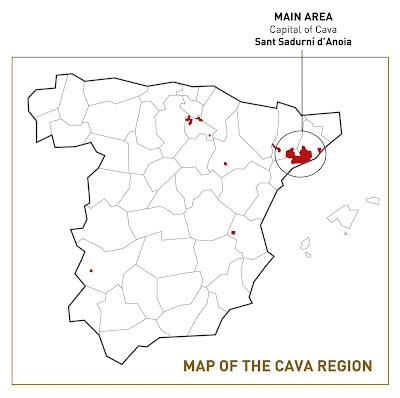 By law, Cava can be made from the following white varieties: Parrellada, Xarel-lo and Macabeo. In the 1980s, Chardonnay was also allowed and Subirat (which is not very much used). Red varieties are used to make Rosé Cava, Garnacha Tinta (Grenache), Pinot Noir, Monastrell and Trepat. Rosé Cava is made by allowing some skin contact with the juice, using the Saignée method, because the blending of white and rosé wines (like in Champagne) is not allowed by law.

Most white Cavas are a blend of the basic three: Parellada, Xarel-lo and Macabeo. Parellada adds finesse to the blends and is usually planted next to Chardonnay in the coolest sites. Xarel-lo adds body and acidity to the blend, while Macabeo (also known as Viura in other parts of Spain) adds fruitiness and aromatics. 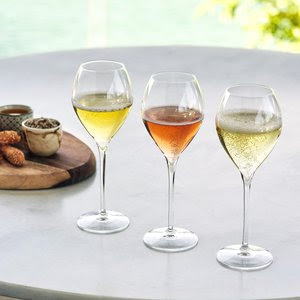 The first Cava to include some Chardonnay in its blend was Anna de Codorníu in 1981, since then some producers make 100% Chardonnay Cavas (also known as Blanc de Blancs).

There are several differences with Champagne. In Cava they don’t normally use red varieties to make white sparkling wines. Another big difference with Champagne is the location and the weather, Catalunya is located farther south, and in general warmer than Champagne, requiring early picking to preserve acidity in the fruit. Cavas, as I said at the beginning, are made using the same method as Champagne, but they are aged on their lees for shorter times. Cava like Champagne can be non vintage or vintage.

Laws regulating Cava changed this year, on July 15 2020.The purpose of this change was to promote the terroir of the appellation, something that they didn’t have before. They especially established differences according to locations, soils and climates.  The new law delimited a three level system that includes four zones: Comtats de Barcelona,  Valle del Ebro, Almendralejo and Altos de Levant. Several subzones that include: Valls d’Anoia-Foix; Serra de mar; Conca del Gaia. Alto Ebro; Valle del Cierzo, among others and eight paraje calificados or single vineyards: Can Sala, Vallcirera, La Fideuera, La Pleta, El Tros Nou, La Capella, Can Bas & Can Prats.

According to their aging on the lees/dead yeasts, Cava is classified as follows:

Cava Reserva, Gran Reserva and Cava de Paraje Calificado can only be made in a dry style (extra Brut, Brut and Brut Nature).

Stylistically, Cava will feature notes of almonds, yellow apple, lime and quince, honeysuckle complemented by brioche and yeasty notes from autolysis. The higher up you go in quality, like Gran Reserva or Cava de Paraje Calificado, the better the quality of the fruit, the quality of the wines, and closer to a good Vintage Champagne.

Here are some new releases to enjoy for the upcoming holidays! A special thanks to Vilarnau, HB Merchants, Broadbent Selections, Taub Family Selections, Palm Bay Imports, Codorníu Cavas Pares Balta and Vineyard Brands for sending this beautiful selection of bubblies. Map, courtesy of the CRDO Cava.

A classic blend of Xarel-lo, Parellada and Macabeo, this cava is aged for 18-24 months on its lees. Fun and a true value!

This cava de Guarda is made from Monastrell, Garnacha and Trepat and aged for 9 months on its lees. A Classic for Christmas in all Spain.

Colorful packaging for this Cava, featuring 45% Macabeo, 40% Xarel-lo and 15% Parellada. It was aged for 12-15 months on its lees. Fresh and crispy.

A traditional blend of mostly Macabeo (60-70%) and the rest Xarel-lo and Parrellada. Refined and elegant.

Aged between 15-24 months on the lees, features a blend of Garnacha and Pinot Noir. Beautiful packaging reminds you of Gaudi's and Miro's art. Refreshing.

Organic and vintage Cava, features a blend of mostly Xarel-lo (78%) with Chardonnay and Pinot Noir. Aged on its lees for 80 months. Superb! 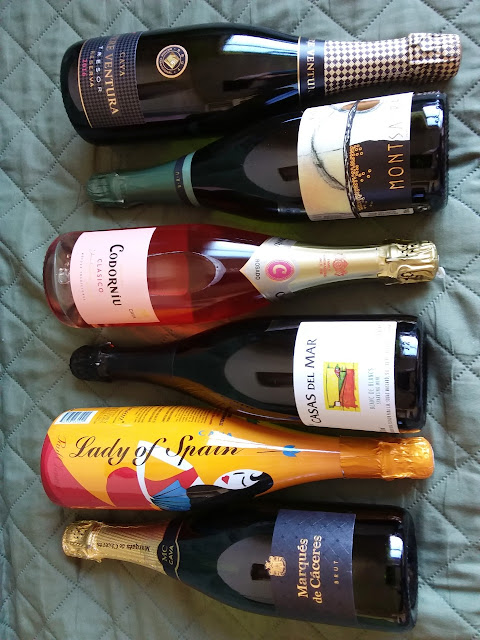 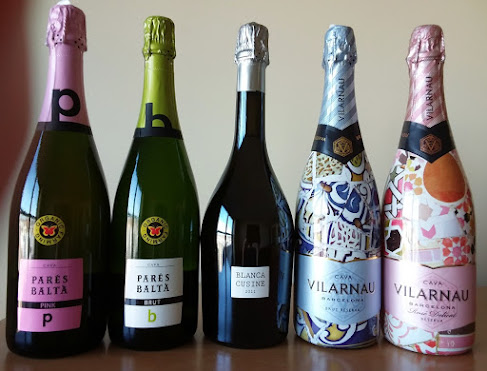 There you have it! your evisit to the sparkling world of Cava! Cheers, Silvina.